It used to be the desert town for the retired rich, and older celebrities like Bob Hope. But Palm Springs has gotten younger and cooler. 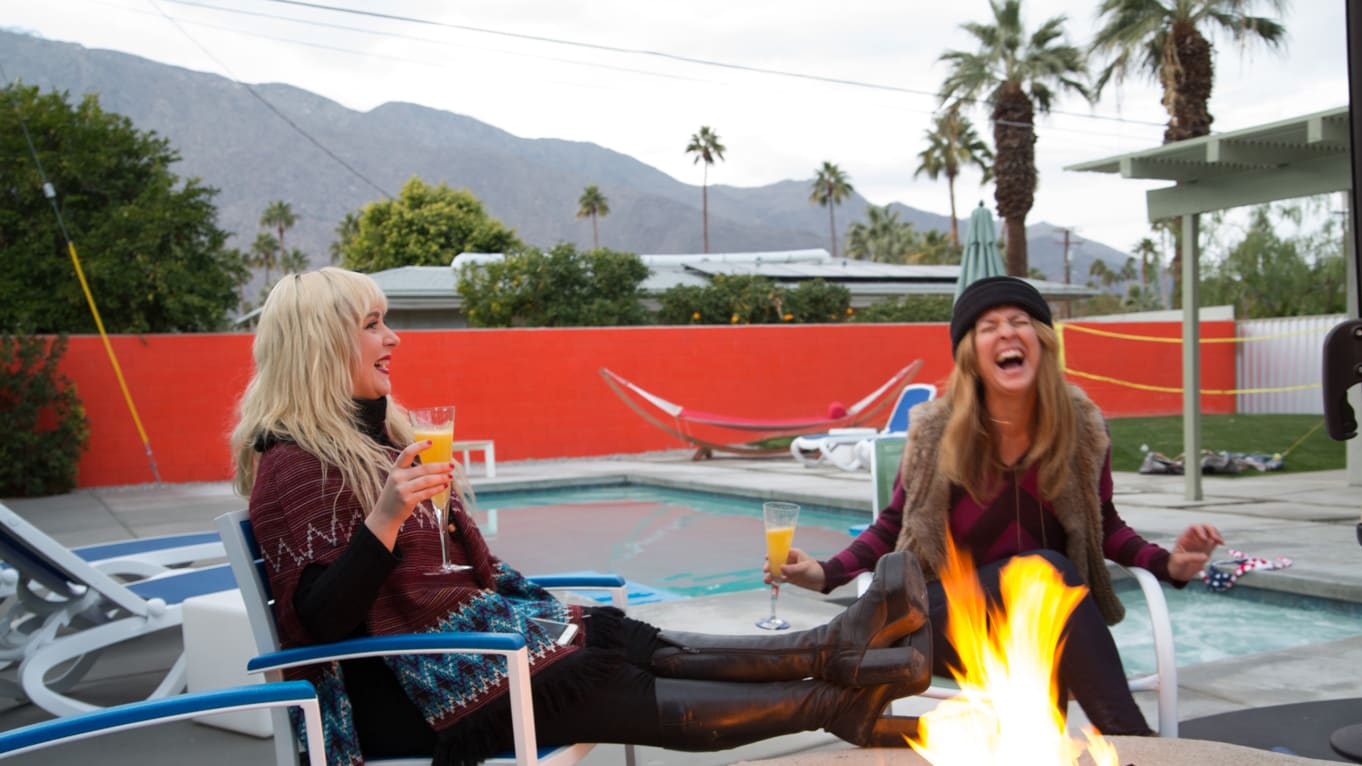 People who have never been to Palm Springs, California, or those who haven’t visited this picturesque desert oasis in years, will no doubt be surprised to find the town listed as No. 1 on Gogobot.com’s March 2016 list of “The 10 Hippest Mid-Sized Cities in America.”

Seemingly overnight, the town of Frank Sinatra, Bob Hope, and the Gabor sisters has become the town of Leonardo DiCaprio, John Barrowman, and Sia.

As Saoirse Ronan, Rooney Mara, and Brie Larson walked the red carpet at this year’s Palm Springs International Film Festival—and 77,500 people descended on the town for Modernism Week 2016—it was clear that this little desert resort town has become a hip 21st-century destination that’s embraced in all its quirkiness.

Or as music manager Laurel Stearns observes, “Back in the day, it was like the newlywed and the nearly dead, and now it’s completely opposite.”

Stearns has worked in the music industry for 20-plus years, signing or managing artists as diverse as Gwar, Father John Misty, the Decemberists, Red Fang, and Fisherspooner.

Although she now lives in Los Angeles, Palm Springs is her hometown and she’s seen its entire metamorphosis.

“The desert equals relaxation for me,” she says. “I don’t get to go that often, but when I do I’m completely submerged in happiness. Describing the feeling that the desert gives me is pretty powerful—you feel the weight of urban life lifting.”

The annual Coachella Valley Music and Arts Festival—now one of the largest and most profitable music festivals in the U.S.—is an event Stearns never misses.

One year, she rented a midcentury modern home in the Palm Springs Racquet Club neighborhood where many of the musicians who appeared at the festival came and hung out after their performances.

Stearn’s friend Caroline Ryder, a journalist, author, and screenwriter, was among the guests that weekend and has become equally mesmerized by the desert.

After quitting her job as a local newspaper journalist in London, Ryder experienced the desert for the first time on a road trip from New York to California. “I remember being absolutely, completely blown away by the landscape and the beauty of it,” she says.

For her recent thirtysomething birthday, Ryder rented Alexander’s Blue Hawaiian, a midcentury home that’s among the 70 properties in the portfolio of the vacation rental firm ACME House Company. “I’m friends with John-Patrick Flynn [ACME’s brand specialist] and he suggested the house,” she says.

“I had just come back from a woman’s writing retreat up in Seattle called Hedgebrook,” she adds. “It’s all about women taking care of women and I decided to rent the Blue Hawaiian and re-create that experience of a women’s writing retreat and share it with my friends. [I wanted to] create a place where it wasn’t just about celebrating my birthday, it was about getting my best friends together in a completely relaxed environment where they could work on their own projects, share ideas, and we would have meals together.

“It’s probably the best birthday I’ve ever had. I was there for five days and I didn’t leave [the house] once. My friends went out to get food. I was just there and completely, blissfully sort of in this Palm Springs bubble.”

Ryder rented another ACME property, Three Amigos Ranch, during the Palm Springs International Film Festival and experienced a cinematic moment all her own when her friend Siobhan Fahey [one of the members of Bananarama] brought some British filmmakers by the house.

One of them, a producer of the film Set the Thames on Fire, was intrigued by a script Ryder had written inspired by her friendship with the German actor Udo Kier and is considering optioning it.

One of those experiences occurred during a visit with her friend Elza Burkart, a 28-year-old Los Angeles-based illustrator and painter. “We started working on a graphic novel together,” says Burkart. “It takes place in a weird, made-up near future. It’s kind about this girl who starts a sexual revolution on a sterile planet. And when we were going to Palm Springs [Caroline and I] started getting inspired by all the colors, the history, the art [and] it kind of started becoming a recurring theme in our story [‘Pansy Goes to Planet Palm Springs’].”

Like Laurel Stearns, Curtis Mead and his wife, Katie Kay Mead, have spent a lot of time in the desert during their trips to the Coachella music festival. Curtis was a member of the band Split Lip and Chamberlain in the 1990s and is now co-owner of East of Western, a company that builds custom portfolio and e-commerce websites.

Katie grew up putting on punk shows and touring with local bands, taught and performed belly dance, and made costumes for herself and others. In the mid-2000s, she began to focus on a fashion career in Los Angeles and is now a freelance creative director.

“We both spent a lot of time in the desert during trips to Coachella, enjoying the music, attending the parties, and driving around obsessing over midcentury modern homes,” says Curtis. “Never did we think that one day we’d own a piece of this great history. Over the years, we started appreciating the layers to Palm Springs—it wasn’t just for retirees anymore. I love that it’s slower-paced and certain neighborhoods have been so well preserved. It’s a great cross section of all types of people that really appreciate an important era and time and do their best to preserve that aesthetic and feeling.”

In 2014, the couple purchased a home designed by the legendary midcentury architect William Krisel and built by the Alexander Building Company. They dubbed the home “The Modern Territory” and offer it as a vacation rental. “It’s been surprisingly rewarding, both emotionally and financially, to host people from all over the world at our house,” says Curtis.

“My grandparents have been coming to Palm Springs for years, but not until I first performed at Coachella did I make the trip,” adds Katie. “It just wasn’t somewhere you came to as a young person before.”

“Everyone moves so slowly there but not in a weird way,” says Burkart. “You just feel really revived by it. I feel like the moment you step out of the car and that heat blasts you that every tiny, real-life problem just disappears and ideas start coming back and every little thing starts inspiring you. That inner editor that’s in your head all the time is gone and I just feel like I can be myself.”

Palm Springs: where to hang out

“I’m a big vintage person and I love The Déjà Vu Room,” says Laurel Stearns of the shop that specializes in vintage clothing for women and men. When she’s in town, she also stops in at Vintage Oasis, which carries vintage architectural pottery in addition to clothing, furniture, and lighting.

The Uptown Design District is lined with a diverse array of cool stores including Dazzles (midcentury home furnishings and a large selection of costume jewelry) and Trousdale’s Timeless Modern (midcentury furniture, artwork, and accessories).

There’s also no shortage of great places to dine. “I love having breakfast at King’s Highway at the Ace Hotel,” says Caroline Ryder. Stearns is a fan of Lulu California Bistro in downtown Palm Springs and The Parker hotel and its bistro, Mister Parker’s, while Curtis and Katie Kay Mead enjoy an occasional dinner at the ultra-modern Workshop Kitchen + Bar.

“Eight4Nine attracts a diverse group of younger food fans from Los Angeles, New York, and beyond,” says Willie Rhine, co-owner of the restaurant.

“They appreciate our ability to host a large group of friends when they celebrate a landmark life event, or offer a small table where they can escape for an evening in one of our private dining rooms. Younger diners are well traveled and get our eclectic décor immediately. They also ask great questions about our menu and the unique ingredients selected by our chef.”

The town’s choice of accommodations rivals the diverse selection of restaurants. Elza Burkart often stays at the Avalon Hotel when she comes to town. A recent addition to the lodging scene includes L’Horizon, which was originally designed in 1952 by the well-known architect William F. Cody as a private family retreat for the television producer Jack Wrather and his wife, actress Bonita “Bunny” Granville. The hotel’s al fresco restaurant, SO•PA (short for South Palm), has been

earning raves for its light, healthy Mediterranean cuisine. And the north part of town recently welcomed the Arrive hotel and its restaurant Reservoir.

Many people prefer to rent one of the historic midcentury or Spanish-style homes that dot the neighborhoods throughout the city. “Our client base is definitely changing,” says John-Patrick Flynn, Branding Specialist for the rental firm ACME House Company. “Multi-generational families and mature snowbirds are still the bulk of our guest demographic but we have had strong growth from the thirtysomething set, especially in the past two years.

“A large part of that is the Hollywood hipster from five to 10 years ago who has grown up. He/she still wants to come to Palm Springs like they have been doing for years, but now that they are over 30 they live and play differently. Their lifestyle isn’t really about partying around the clock anymore [and] the vacation home rental is a sensible option.”